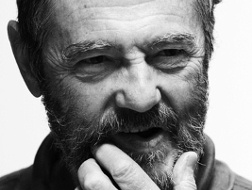 La career of master architect and designer Tobia Scarpa is studded with awards and titles as his creations, which are constantly and coherently at the service of beauty, have rewritten the history of Italian design, elevating it, to all effects, to a display of art. Born in Venice in 1935, Tobia Scarpa worked in the city with the professional and personal assistance of his wife Afra Bianchin, with whom he created several architectural designs which are now part of our nation’s historical heritage.

In addition to their work in the field of architecture, the Scarpas also pursued their vocation for furnishing the large offices of several Venetian companies, including C&B, Benetton, Unifor and Geox, also designing their executive offices and the factories where the clothing was produced. It was the middle of the 1960s, a period of buzzing activity in the design scene, but the Scarpas did not join any specific movement, preferring to continue working far from the madding crowd and distinguishing themselves for their choices of grand stylistic prestige.

In 1970 the couple won the Golden Compass, the most coveted award in the world of design and began work on a series of projects with the big names in the national design scene, such as Flos, Gavina, Cassina and StilDomus. Some memorable examples, which are still recognised today as grand elements of furniture are their Vanessa beds designed for Cassina, and the Bastiano sofa created for the historical Gavina brand. The Vanessa bed, a piece which is adored by design enthusiasts, has a base entirely made of painted metal, in deep colours such as China red, deep black and optical white. The amazing aspects of this element are the pure nature of its forms and the simplicity of the geometry applied to the object, which in any case succeeds in incorporating a warming essence that is full of passion. The same idea can be found and identified in the Bastiano, sofa which is composed of a wooden base and covered in leather. The rich, deep, middle-class colours of this much-loved sofa dated 1961 combine with a quality and convenience that has written the story of furniture as this item can be considered the forerunner of the modern sofa bed. Moving the cushions, the area available is indeed incredibly large, comfortable and welcoming: the ideal choice for accommodating the best quality in terms of relaxation.

And here you have him: Tobia Scarpa, a man who, with the help and intelligence of his wife, has succeeded in creating examples of design that have now become part of our cultural heritage and which will never be forgotten, as they are perfect works which can be adapted to fit all historical periods. These traits can also be acknowledged in the lighting systems created for the Flos brand. In particular, the Biagio and Fantasma systems can be seen as the bedrocks of Italian design lighting. Whereas Biagio owes its success to the use of valuable materials such as Carrara marble, and to its shape which tends towards an elegant, space-age geometry, the Fantasma lamp can only be defined as state-of-the-art, a slim floor lamp made of fibre glass on a metal frame.

It is amazing to think that each one of the Scarpas’ creations has become a point of reference in contemporary design, as the echoes of their art are widely visible in their current designs and in the inspiration for their mass-produced elements. All this honours this artistic couple, who have succeeded in transcending the limits of time and space, proposing designs made to last an eternity.