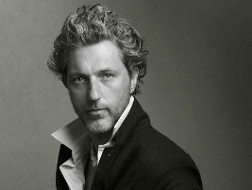 Ironic, amazing, a designer who does anything but fit into any of the boxes usually found in the market. Marcel Wanders is all of this, a name which has by now become a legend in international design. Born in the town of Boxtel in 1963, Marcel Wanders graduated with distinction at the Hogeschool voor de Kunsten, or the ArtEZ Institute of the Arts in Arnhem in 1988, having been expelled from the Academy of Design in Eindhoven.

In 1995 he opened his studio for business in the lively heart of the city of Amsterdam, where he began to attract international attention thanks to his iconic Knotted Chair creation dated 1996, which combines top quality, highly technological materials with a production process that is worlds apart from technological inspirations, and closer to the traditional methods used by master craftsmen. To date, Marcel Wanders’ studio employs more than 50 workers from all over the world, and he himself continues working steadfastly as designer, art director and architect committed to the design of private and urban areas. He has worked on more than 1700 projects, including brands such as Alessi, KLM, Swarowsky, Flos, and Puma to name but a few. Considered a phenomenon 'sui generis' in the world of design, Marcel Wanders has declared that his main objective is to give birth to a life made of love and lived with passion, and that this objective stems from his desire to create and turn his dreams into reality. There is no way that his work can go unnoticed as he takes great delight in amazing, challenging and provoking humanity with his design works and installations. It is not surprising that the New York Times has defined Marcel Wanders the 'Lady Gaga' of design. Wanders is also considered one of the 25 ‘advocates of change' proclaimed by the esteemed magazine Business Week. His work and career are studded with prestigious prizes and industry awards, from the Designer of the Year title bestowed on him by Elle magazine in 2006, to his victory of the prestigious Collab, a complementary event linked to the Museum of Modern Art in Philadelphia, and the much-coveted Design Excellence Award which he won in 2009. In his design, Marcel Wanders mixes innovative materials and techniques inspired by antiquity to create extremely functional objects and urban contexts with a warm, embracing feel. The designer’s desire to reunite designers and craftsmen in a single project is applied in each of his creations. He is committed to recreating the magnificence of history and reintroducing it in the pieces created in the present. Design and craftsmanship: these are the secrets to his success and the objective that Wanders offers his public. In 2001, Marcel Wanders co-founded the now acclaimed design studio MoOoi, of which he is art director. It is not only a workplace but a true hotbed of creative genius, and a platform that welcomes young talents from all over the world who identify with Wanders’ values and wish to help convey them with their designs, always undoubtedly eccentric but inspired by the desire to make the here and now a better place for all of humanity.