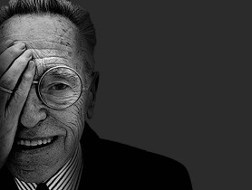 Achille Castiglioni was born in Milan in 1918 and graduated in architecture in 1944. Until 1940, he and his two brothers were committed to experimenting with industrial products. From 1944 onwards, and therefore immediately after his degree, he began a series of in-depth research on forms and new materials, with a view to creating a form of integral design.

In 1969, he received a “Libera Docenza” degree in Artistic Design for Industry, and in 1980 and 1993 he respectively occupied teaching positions in Industrial Design at the faculties of Architecture in Turin and Milan. Since 1950, he has worked in the research field, experimenting with exhibition layouts. Many of his creations are located in the MoMa in New York, the Museum of Design in Prato and the Victoria and Albert Museum in London. He has received many awards during his brilliant career, including no less than 9 Golden Compass Awards for his efforts to elevate design to the highest levels of culture. He also received an honorary degree from the Royal College of Art in London (1987) and an honorary degree in Industrial Design from Milan Polytechnic University (2001), the annual "Chartered Society of Designers" award in London and many other international titles. He designed many products made by large companies, was extremely active in the field of architecture and town planning and he was known internationally for his important designs in the fields of lighting and furniture, as well as for the layouts he created all over the world. Castiglioni passed away in Milan, in 2002, at the age of 84 years old. He completed many projects in the industrial design field, such as Diablo, a particular hanging ceiling lamp in painted aluminium with a pulley system concealed from view by a cone attached to the ceiling. Instead, Fucsia is a hanging lamp designed to resolve the problem of creating an even, direct light that can be diffused on various levels. Another of his creations is Record, a watch characterised by a face with the largest possible surface available to enable the wearer to tell the time easily and immediately. These are only some examples of his work, which always stand out for their apparently simple structure and the particular care devoted to the technical and aesthetic details. Several of his important works were created in the field of architecture, such as his renovation project for the family home, where the architect designed as a simple environment with all the living essentials; the result of the history, memories and the dearest objects from the Castiglioni residence. Another important creation was the Splugen Brau beer house, designed in a ground floor property that looks directly out on to Corso Europa, in Milan. The furniture, in true Castiglioni style, was conceived right down to the finest detail with a view to giving every customer the maximum in comfort and everything that an area of this kind can possibly offer. Castiglioni also had a hand in the reconstruction of the Torre della Permanente, in Via Turati in Milan, which had suffered damage as a result of bombing during the Second World War. The exhibition halls, partly salvaged, were organised differently and structured using mobile partitions based on the specific requirements. A glass mosaic and the doors, finished with meticulous precision, completed the work.