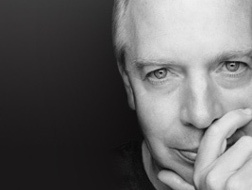 Born in London in 1953, David Chipperfield is, to date, one of the most famous, esteemed architects and designers on the planet. Having completed his studies at the Architectural Association in London, he began working with some of the big names in English architecture, such as Richard Rogers and Norman Fosters. In 1984 he opened his own personal studio in London, David Chipperfield Architects, and in a short space of time also opened branches in Milan, Berlin, Shanghai and Tokyo. David Chipperfield worked hard in the Japanese capital, creating memorable projects such as the Gotoh Private Museum in Chiba, the Headquarters of the Matsumoto Company in Okyama and the imposing Design Center in Kyoto. This last building is iconic of his art and his conception of architecture, as its defined, geometrically clean structure blends stylishly into its surroundings, merging into an environment which has been designed to achieve the best possible aesthetic effect through urban construction. His work, composed of large windowless walls is assembled in irregular geometric forms, but he uses these to make his designs useful, liveable and flexible with regard to the outdoor environment. The best example of his frequent use of columns can be found in the much-acclaimed, recent One Pancras Square project, a nine-storey building studded with columns, located in the busy city centre crossroads between St. Pancras and King's Cross in London. Thanks to his refined style of architecture, which can always be linked to the Victorian style he loves, David Chipperfield has been able to redevelop and create buildings of a certain significance in his home city, becoming a reference point for design in the urban fabric of London. But David Chipperfield is not only a master of architecture and redevelopment. His successes also include the projects he has completed for the large fashion houses who have sought his creative genius to bring their headquarters, production facilities and sales areas to life. He has worked for Dolce & Gabbana, designing many of their European premises in the first years of the new millennium, and his most recent work linked to the world of fashion was the Valentino boutique located in via Montenapoleone in Milan. David Chipperfield alternates interior and exterior architecture projects with important partnerships in the world of high class design. The best-known example of the latter is undoubtedly the extra limited edition tea and coffee sets he created for Alessi, composed of a tea pot, coffee pot, milk jug, sugar bowl and tray. The materials used are ceramics, double-walled silver and the silicon that defines the handles of the coffee and tea pots. Chipperfield has also worked with Alessi to create Santiago, a cutlery service which has now become part of an iconic collection, and a dinner service named Tonale. The materials and forms that characterise these services are purposely middle class, rendering finished products that bring echoes of ancestral beauty and offering aesthetics that outclass all limitations that may be imposed by time and space.  These same characteristics and same aesthetic objective can be clearly identified in each one of David Chipperfield’s creations. He is only relatively interested in the trends of the moment as his style lies on a level above these, imposing its dry, precise, efficient essence: its 'Britishness' is present in every single tiny detail of all his works.