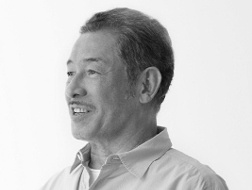 Issey Miyake is one of Japan’s best known stylists. The search for things beautiful, in an absolute sense, has always been central to his career.
Born in Hiroshima in 1938, he attended a graphic design course at the prestigious Tama Art University in Tokyo, one of Japan’s most famous universities, where Issey Miyake showed a strong passion and outstanding talent for all things associated with design and style.
After graduating, he decided to focus on his projects and ambitions, which took him around the world, with stops in major cities such as Paris and New York, where he was able to work with a number of leading designers and stylists of the moment, in a period in which new and important world design schools were developing. Issey Miyake’s work has always been appreciated by the designers he has worked with and his name quickly became famous in the environment with a burgeoning demand for his work.

After a few years working around the world, Issey Miyake went back to Tokyo, where he decided to exploit the experience he had acquired by opening a design firm, Miyake Design Studio, which soon began setting the standards in Tokyo and the country as a whole and boosted the popularity of Issey Miyake. Initially however, his career centred mainly on fashion and on the quest for new materials and solutions in this field. Incredibly successful was his participation in the New York and Paris fashion shows, where Issey Miyake was considered to be a visionary and futuristic artist, capable of inventing and transforming his ideas into cult objects.
Nevertheless, a career in the fashion circuit was not Issey Miyake’s greatest ambition and so, after a few years and big achievements in this sector, he decided to abandon his creations as a stylist and dedicate himself to his real passion, design, delegating the entire fashion sector to his trustworthy right-hand man.

As a design artist too, Issey Miyake has shown himself to have that little extra something and keener sensitivity: his works have become exhibition pieces in major galleries around the world, from London to New York, and of course Japan.
With the passing of the years, Issey Miyake has never lost his passion and capacity to surprise with his creative genius and, in 2014, he achieved another goal, another prize to be added to the long list of accolades that have accompanied his work – the ADI Golden Compass for having designed the IN-EI Issey Miyake lamp for Artemide, an Italian company known the world over for its design products.
This lamp is the upshot of complex research and development carried out by IN-EI Issey Miyake with the technicians and experts of his Tokyo workshop, set up in the design centre.
IN-EI Issey Miyake has always been attracted by re-use and recycling and trying out innovative combinations and technologies.
For this lamp, research results were revolutionary. By using a regenerated fibre deriving from a number of industrial wastes, a material has been created with ample light reflection capacity that provides an energy saving estimated in 40% compared to traditional lamps