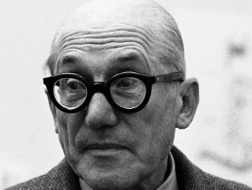 Charles-Edouard Jeanneret-Gris was one of the greatest architects in the history of the twentieth century. The name may not ring much of a bell or indeed any bells at all. Indeed, the architect in question has always worked under a pseudonym: Le Corbusier.  Born in Switzerland in 1887, but a naturalised Frenchman, Le Corbusier was influenced by his father’s business in the early years of his career: indeed, Georges-Edouard Jeanneret-Gris worked as a watch and clock enameller in the small Swiss town where the family lived. Drawn to this world, Le Corbusier decided to take up studying art as a decorator and this provided him with an important cultural background into which he would frequently dip during the rest of his career. However, afflicted by problems with his eyesight, which gradually worsened, he was obliged to change his course of studies and focus on architecture and furniture decoration, attending the Cours Supérieur d'Art et Décoration. The first project offered to Le Corbusier was that of thinking up an alternative for the Union Chrétienne de Jeunes Gens buildings: his response impressed his mentors who continued to assign him projects of increasing prestige and importance, having recognised his natural gift for this kind of work. One of Le Corbusier’s most famous works from this period of study dates to 1905, and is the design of the villa belonging to Louis Fallet, which contains clear evidence of the stylistic trends the young architect aspired to create, inspired by the natural environment and championed by L'Eplattenier. The leitmotiv of the designs he created in this period were fir trees, reminiscences of his studies as a timepiece decorator, and these are also reflected in his design for Villa Fallet, which is conceived as a stylised fir.  Two years later, work began on building Louis Fallet’s villa according to Le Corbusier’s design, and this would be his first true project as an architect, but in the same year he also began working as a furniture and decor designer, a role that would bring him great satisfaction in later years. As Le Corbusier was an admirer of Art Nouveau, his travels took him mainly to Italy and central Europe, where he was able to study the Gothic and Byzantine styles at first hand, filling his notebooks with notes and ideas about the main architectures, especially the Italian ones, which would serve as the daybook for many of his future works. As an architect, he opened his own studio in Paris in the second decade of the twentieth century and his business took off, as he took on increasingly prestigious projects, such as the State Ministry of Economic Planning in Moscow. His achievements in the field of town planning also deserve a special mention, such as those relative to the cities of Algiers, Barcelona, Rio de Janeiro and Stockholm. Driven by the desire to express his ideas and his concept of the "beautiful and functional", Le Corbusier also focused on design, which for him had to generate objects that were useful and nothing more. What is a chair if it is not used as a chair? According to his idea of beautiful and functional, furniture and decorative elements had to be restoredto their barest beauty, free of frills. He was the first architect to see and design man-size houses, living spaces designed based on the golden ratio based on the proportions of the human body. And this is also why all the elements designed by Le Corbusier are still up-to-date today, never commonplace and blend in perfectly with modern style: a concept of timeless functionality that has revolutionalised how design is conceived and expressed.