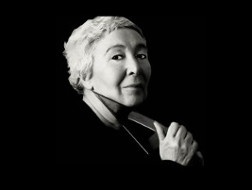 Gaetana Aulenti, better known as Gae, was born in Palazzolo dello Stella on 4 December 1927. Her father, Aldo, hailed from Puglia, and her mother, Virginia Gioia, was a Neapolitan of Calabrian origin. For many years, she was the companion of Carlo Ripa di Meana, from whom she separated because of political differences. Young Gae immediately dedicated herself to her great passion and, in 1953, obtained a degree in architecture at the Milan Polytechnic. She qualified to practise the profession in the same university.

Which are the most famous Gae Aulenti lamps?

There are several famous lamps designed by Gae Aulenti, but perhaps the best known is the Pipistrello lamp. It is a table lamp composed of a white marble base with a slender stem that supports a white lampshade. The lampshade is made of a translucent material that allows light to pass through it, creating a soft and diffused light. The lamp takes its name from the word "Pipistrello" ("bat" in italian), precisely because it resembles a bat with outstretched wings.

What is the price of the Pipistrello lamp by Gae Aulenti?

The story of Gae Aulenti

Aulenti was strongly influenced by the Italian architectural scenario of the Fifties and dedicated a great deal of her time to recovering the architectural values of the past which are at the bottom of the Neo-Liberty movement.  Between 1955 and 1965, she worked with Casabella and was assistant professor at both the Venice Architectural University Institute and at the Milan Polytechnic. In Venice, between 1960 and 1962, she worked alongside the professor of Architectural Composition, Giuseppe Samonà, while in Milan she collaborated, between 1964 and 1969, with Ernesto Nathan Rogers. It was in that period that she met Renzo Piano, at the time engaged in a research project for the professor. 1965 was an important year for Gae Aulenti who designed the by-now famous table lamp conceived and made in Paris for the Olivetti showroom: Pipistrello. Collaboration with the Olivetti group provided her with a privileged place on the Italian design scene. So much so that she was contacted by Gianni Agnelli to look after the restructuring of his apartment in Brera. Her friendship with Agnelli strongly affected Aulenti’s work and, several times during her career, she found herself working for the Milan entrepreneur. By the Seventies, she was also well known on the other side of the Atlantic. Emilio Ambasz invited her to take part in the Italian exposition: the new Domestic Landscape, staged in '72 at the MoMa of New York. Her academic "cursus honorum" continued with an appointment as correspondent of the National Academy of San Luca in Rome, a title she received in 1984, and as President of the Brera Fine Arts Academy. When asked to describe her architecture, she would say it was the upshot of close collaboration between urban buildings and environment, which in a certain sense represented the generating force of architectural space. During the design stage, she always endeavoured to convey to the product of her architecture a series of multiple and intense elements which are an integral part of the urban universe. Finally, in 2005, she set up the firm, Gae Aulenti Architetti Associati. On 31 October, she died in Milan, after receiving, at the Triennial, a lifetime achievement award.  On 7 December of that same year, a square was opened and named after her in the Unicredit Tower complex in Milan. Among her numerous architectural works should be recalled the d'Orsay Museum in Paris, the National Museum of Modern Art in the Georges Pompidou Centre in Paris, a building designed by her colleague Renzo Piano, and the Italian Institute of Culture in Tokyo. To these must be added other projects at both national and international level, as well as the many design objects conceived and designed by architect Aulenti.
Shop By
Shopping Options
Brands
Price
Category
Rooms
Colour