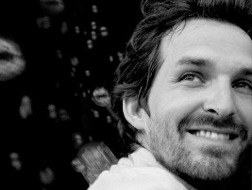 Mathieu Lehanneur is one of the most prolific, creative professionals in the field of contemporary design. His design activities span from urban architecture to industrial, commercial and private layouts and they constantly focus on the ergonomics of his creations, and the harmonious balance between man and nature. His most interesting projects based on innovation and technological experimentation, have been recognised both in France and abroad, winning many prestigious awards and titles, and are on display in public areas in the centre of Paris and other large cities: interactive screens for special orientation installed in the gardens of Paris; l'Escale Numérique, a series of furniture to be used as resting oases by the public free of charge so that they can use Internet and linked to the underground fibre-optic network, wedged in the heart of the Champs-Elysées; Isaac & Graham, a device capable of reusing the micro-energy produced by the force of gravity, an ambitious scientific-technological project created with the Commissariat à l'Energie Atomique laboratory. Mathieu Lehanneur collaborates with the most famous, influential brands in the commercial sector: Cartier, Ricard, Maison Cailler, Veuve Clicquot Ponsardin. For the latter, he completed an extraordinary project, Once Upon a Time, a bedroom designed specifically for those with sleep disorders caused by psychic problems or jet lag. Studio 13/16 is an extremely significant collaborative project carried out for the famous Centre Pompidou in Paris, the national museum for culture, visual arts and state-of-the-art technology. On the theme of international aid for developing countries, Mathieu Lehanneur designed the CellBag, a special container for transporting drinking water which guarantees optimal environmental conditions, designed for the Moretele communities in South Africa. All of Mathieu Lehanneur’s work can be identified by his personal conception of architecture and furniture design: the way he harmoniously blends the natural and the artificial; the right balance between aesthetic effect and technological efficiency; functional ergonomics. The core concept on which the design process and the final creation are based is always centred round man and the environment.  In Lehanneur’s work, architectural design goes beyond the technological and representative dimension, as everything produced by him fits into the relationship that combines human wellbeing, natural resources and technological innovation to the mutual benefit of all three. Lehanneur also reproposes the main concepts unearthed during his research work and experiments in the lighting sector: the use of innovative, valuable materials to make objects that resemble the forms present in nature as closely as possible and which are able to evoke the dreaminess and magic of the brightness of the sun, as in the lights created for Fabbian. For Lehanneur, light itself is the source of life, optimism and positive energy. Light sources, with their light, ethereal outlines, such as the Cloudy lamp or the Les Cordes lampshade, seem to have been designed to satisfy the spiritual rather than practical needs of human beings. In lighting design, the materials used are reduced to the bare essentials, and the focus is on the luminescence, tricks of light and the jubilation of the gleam experienced, exactly the same as happens in nature, on splendid sunny days or in changeable weather, when the sun peeking unexpectedly through the clouds is a dazzling surprise.