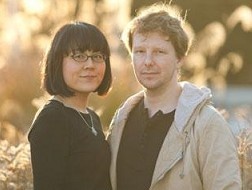 Graduated from Ecole Camondo in Paris in 1999, the French-Japanese design duo, Aki and Arnaud Cooren founded A+A Cooren Design Studio in the same year.
The multidisciplinary duo is working in their speciality field of lighting, as well as product, furniture and interior design.

With a simple Japanese design aesthetic, the studio seeks to integrate a subtle reference to nature into everyday objects and interiors. A+A Cooren looks to Sori Yanagi, undisputed master of Japanese design, whose ambition has always been to capture the spirit of the natural world in everyday life objects within industry standards.

A+A Cooren designs both craft-work and industrial objects, with a complementary design philosophy. With ongoing research into simplicity of manufacturing, and ease of use for the final user, A+A Cooren believes that creating a good product is the outcome of teamwork between the manufacturers or craftsmen, and the designers, with a high demand for quality work.

They design for some international lighting companies like Artemide, Metalarte, Tronconi, Vertigo Bird, Yamagiwa and also for the Japanese jewellery brand Amamika.
They designed also the flagship store for Shiseido Europe in Paris and the Haircare Research Center (3000m²) for L'Oréal in St.Ouen in 2011.
In the field of scenography, they designed the itinerary press exhibition for Chanel Fine Jewellery, press launching for Guerlain and Hermès Parfum, Berliner exposition Design Reference Paris for City of Paris and also the fashion fair Who's Next in Paris.

Since 2010, they work with the Parisian gallery Ymer&Malta for limited edition of furniture and object.
They participated in the group exhibition Nouvelle Vague at Centre culturel français de Milan during the Milan Design week 2011. This exhibition continues on its way to Design Museum Holon in Israel (summer 2011), Au Bon Marché (autumn 2011) and North America in 2012.